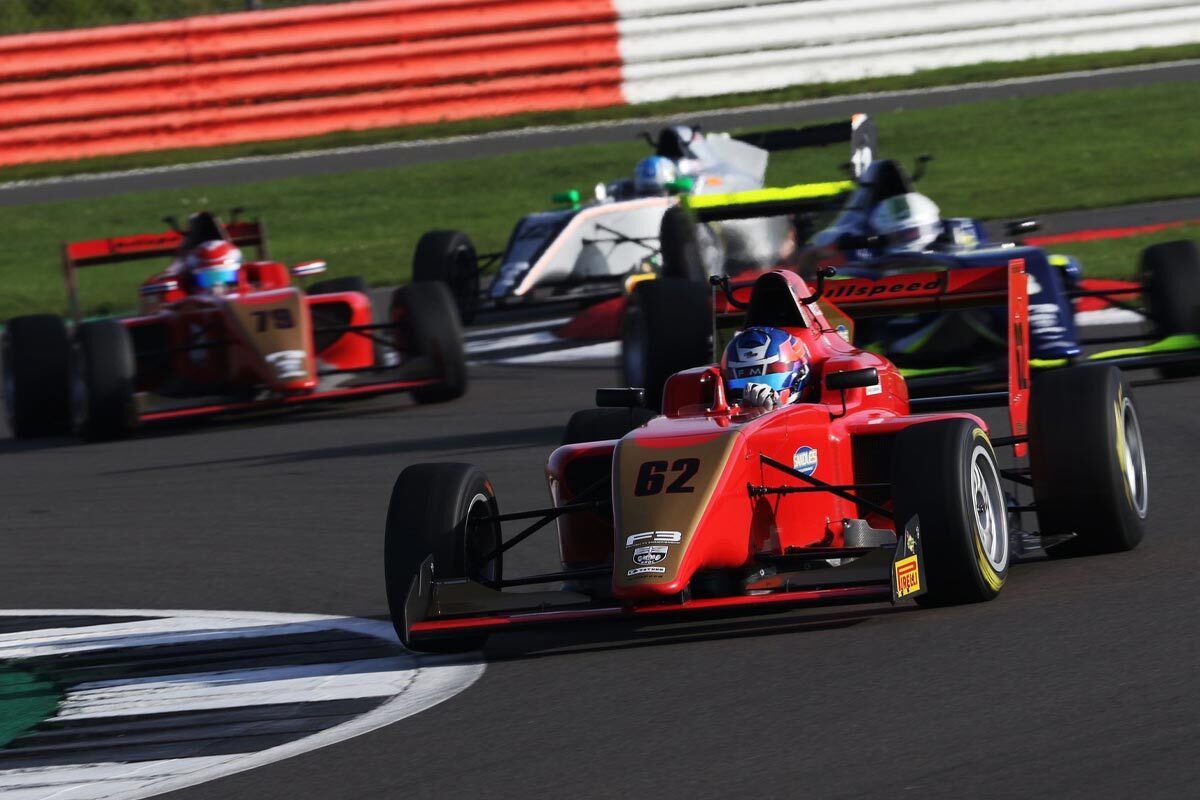 Oliver Clarke signed off his maiden year in the BRDC British F3 Championship at Silverstone this past weekend (November 7/8) in sensational style, claiming an impressive trio of top six finishes and producing one of the drives of the season, charging from last place to narrowly miss out on the podium.

Bringing the curtain down on what has been a whirlwind campaign which packed seven events into little over three months, the Hillspeed driver took centre stage during the season finale; bagging a brace of fourths and a sixth place finish to secure eighth overall in the final championship standings.

Having got to grips with the flowing layout of the Home of British Motor Racing during practice, the 17-year-old headed into the final qualifying session of the season on Saturday optimistic that he could once again be in the mix towards the sharp end of the grid.

In what proved to be an ultra-competitive battle for pole position, the Torq Racewear athlete powered his way to the ninth fastest time, a mere half a second off of the front row.

Launching off the line in the opening encounter, Clarke wasted no time in making progress as he moved up a spot off the start and he soon settled into a groove, chasing the down the train of cars ahead of him.

Jumping into seventh prior to the appearance of the safety car, the two-time podium finisher went on to produce a stunning overtake around the outside of Brooklands corner in the latter stages to secure sixth at the chequered flag.

The first of Sunday’s two races would see Clarke serve up an overtaking masterclass as he powered his way from dead last to fourth place after making an inspired late switch to slick tyres. On a cold and damp track, the former karting ace started 12th but soon dropped to the back of the pack as he scrambled for tyre temperature.

However, once his tyres had enough heat in them the Fewkes Sport Management driver delivered a superlative drive as he carved his way up the order, jumping up two or three spots each lap.

Moving into the top five with a handful of tours remaining, Clarke closed the gap to the lead pack but was unable to find a way past and he ultimately settled for fourth. Despite missing out on the podium, his drive is one that will likely be talked about for some time.

Clarke capped off his weekend, and his season, with another eye-catching performance as he once again came close to a return to the rostrum. Starting sixth, the teenage racer initially dropped back two positions before once again showcasing his racecraft as he battled back to cross the line in fourth.

Had it not been for an unfortunate non-finish at Donington Park, Clarke would have ended the season sitting sixth in the Drivers’ Championship. Despite missing out on the spot by a handful of points, two podiums and a number of standout drives have cemented Clarke’s status as one of the most exciting single-seater prospects to move up the racing ladder in recent years and the future looks bright for the King’s Lynn ace.

“That was a great way to end the season! I’d have loved to have come away with a podium but it wasn’t meant to be and on reflection; two fourths and a sixth is not something to turn my nose up at.

“We had phenomenal pace though in each race and I absolutely loved what we were able to do in race two. We rolled the dice in terms of tyres and took the pain of dropping to the back in the opening stages but once the tyres came in I just had so much grip and was able to move forward.

“Overall it has been a really positive season, we’ve been a regular in the top ten despite having had limited testing and we’ve scored a couple of podiums along the way too. I think in the second half of the season I really hit my stride and proved that I’m more than capable of competing at this level and beyond.

“I’ve got say a big thank you to Fewkes Sport Management as the professional structure they have provided me has really proved beneficial both on and off the track. The support of Mojo Media, Torq Racewear, Hillspeed, my family and friends has been invaluable as well – without everyone I wouldn’t have been able to achieve what we have done this year.

“Whilst the season may have come to an end the hard work doesn’t stop and I’m already looking ahead to the 2021 season. We’re working on putting a deal together and I’m keen to welcome any new sponsors, partners and investors to join me on this journey.”

“Oliver has been a pleasure to watch during his debut BRDC British F3 campaign under difficult circumstances due to the COVID-19 situation.

“It’s quite clear to see that in our FSM stable we have one of the most exciting UK single-seater talents to emerge in recent years, and Oliver’s raw speed and race craft has been exceptional against a lot of year two drivers whilst running on a very limited budget.

“We’re very excited about what the future holds for Oliver and hope to return in 2021 to challenge for championship honours. To make this all possible, we are still in search of partners to join Oliver on his journey and will welcome any interested parties with some great commercial offerings. He’s certainly the real deal and has a highly experienced support team around him.”