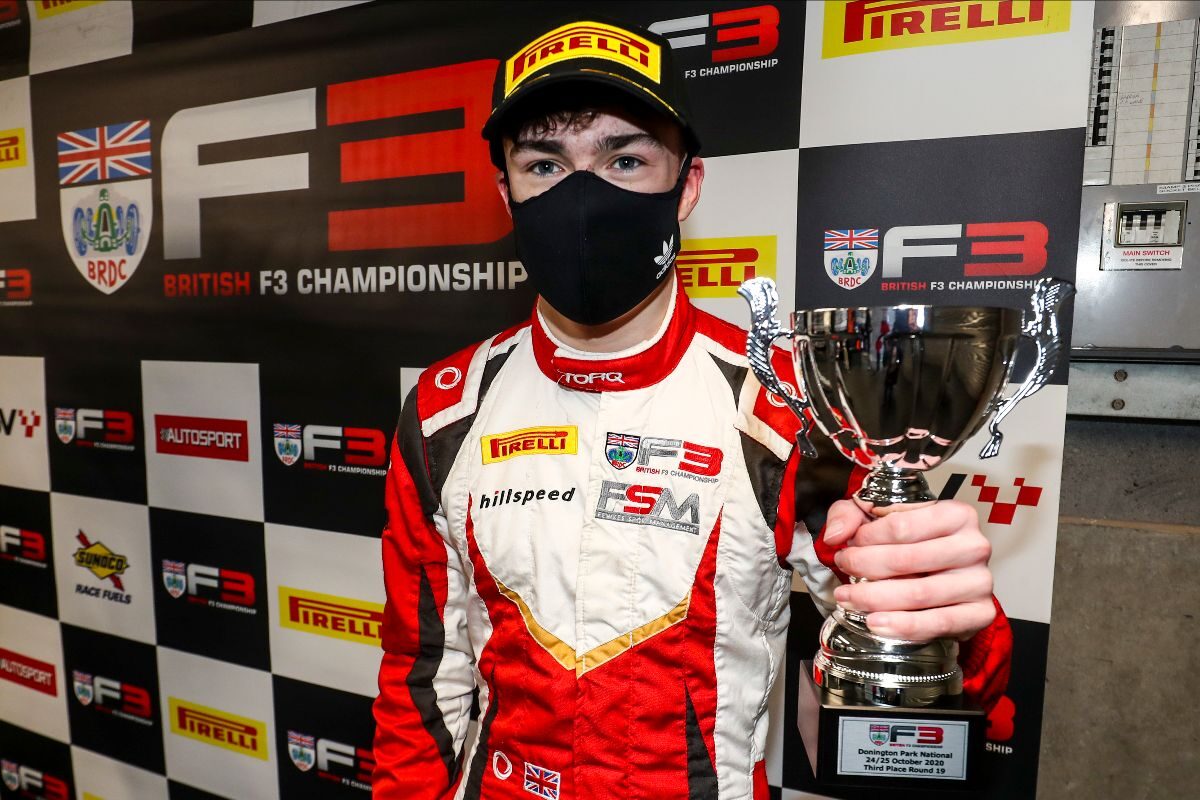 Oliver Clarke excelled whilst enduring a whirlwind of emotions during the penultimate event of the 2020 BRDC British F3 Championship at Donington Park this past weekend (October 24/25) as he scored a sensational podium and then saw another slip away on the penultimate lap of the final race.

Proving to be one of the stars of the show around the National layout of the Leicestershire venue, the Hillspeed driver underlined why he is one of the most exciting single-seater talents to progress through the racing ladder in recent years.

Backed by Mark Brown Electrical, Mitchell Piling Ltd and S Rodwell Decorators for the weekend, the 17-year-old got his eye in across Thursday and Friday’s practice sessions, showing impressive pace and bolstering his confidence heading into qualifying.

In what proved to be a frenetic battle for pole position on Saturday morning, the Torq Racewear Athlete left it until the dying moments before he punched in a rapid time of 1:03.221 to move into second place – securing his best qualifying of the season.

Following qualifying however, heavy rain forced race officials to postpone the opening race until Sunday due to the adverse track conditions.

Greeted by autumnal sunshine the following day, a quick rain shower prior to race one saw tyre choice being the big topic of discussion. Clarke would opt for intermediates; a decision that would ultimately serve him well.

Scrambling for grip as he launched off the outside of the front row in race one, Clarke dropped to third, however his chances of fighting back were immediately halted due to the appearance of the safety car after a string of incidents took place further down the order.

Following a handful of laps behind the safety car, the restart saw Clarke apply pressure on the driver in second place but he was unable to find a way back past. Settling into a groove as the laps ticked by, the Fewkes Sport Management ace held station to cross the line in third place for his second podium finish of the season.

In race two, Clarke was forced to take avoiding action of a rival on the opening lap, taking a trip through the gravel and subsequently dropping to the back of the pack. Producing a string of eye-catching overtakes, the former karting ace underlined his overtaking prowess to bank valuable points in ninth.

Starting second for the third and final race of the weekend, Clarke endured heartbreak as he saw a guaranteed podium finish slip away in the closing stages. Breaking away from the chasing pack, the teenage ace was running comfortably in second before a rear right mechanical failure forced him to pull off the track.

Not only did Clarke’s race three retirement cost him a third podium of the season but it also dented his hopes of cementing sixth in the overall Drivers’ Championship, subsequently now sitting ninth.

“It really is a weekend of mix emotions because I’m obviously over the moon to have equalled my best result of the season and clinch a second podium but we could have repeated the feat in race three.

“Ever since we hit the track on Thursday we were on the pace and I’ve just been able to carry that speed into every session. The car felt great and I really felt I’ve elevated myself to another level in recent rounds.

“Scoring that podium in race one was mega and we had good pace in race two, it was just a shame that I dropped down the order early on. That podium finish was all-but guaranteed in race three and I can’t describe the emotions I felt when the problem struck – I was gutted.

“We’ve got to keep our heads held high though cause we have shown a signal of intent to the rest of the grid. We’ll head to Silverstone in less than two weeks’ time and see if we can end the year on a high.”