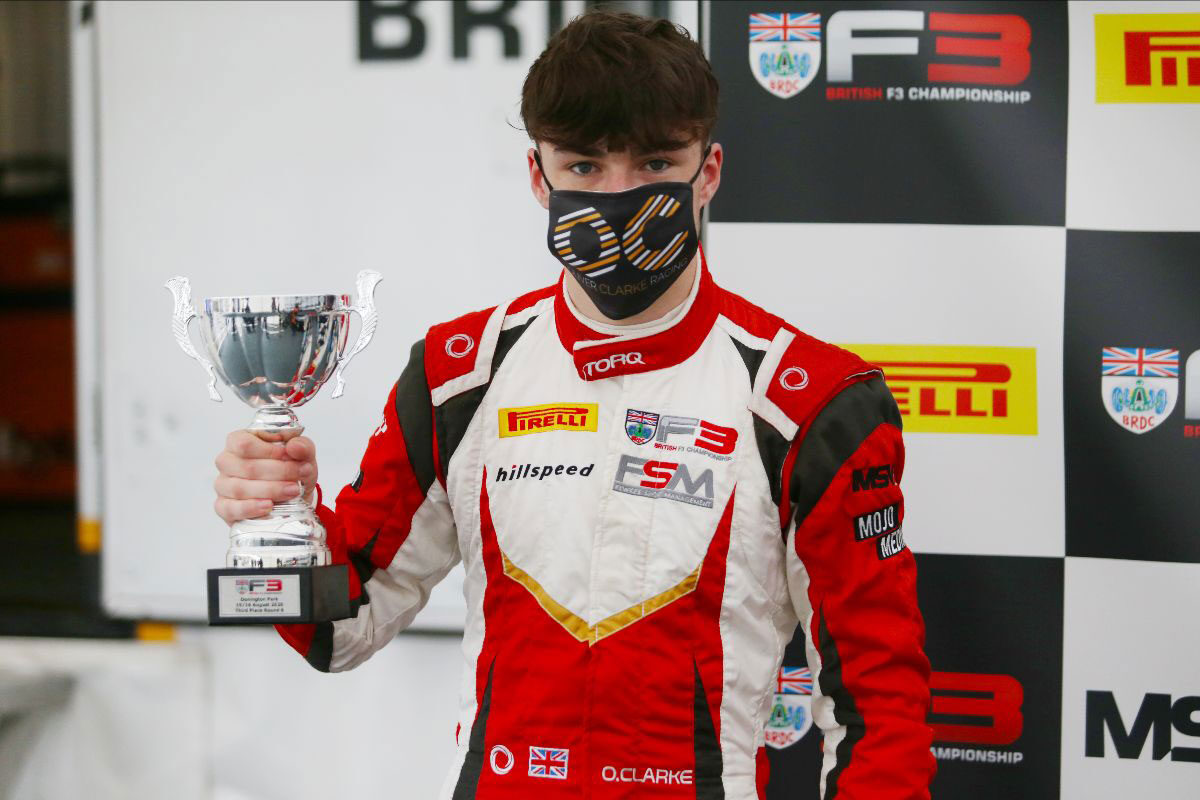 Oliver Clarke showed his fighting spirit at Donington Park this past weekend (August 15/16) to master the wet weather on his way to a first-ever podium finish in the BRDC British F3 Championship.

Coming off the back of an encouraging debut at Oulton Park which yielded three top seven finishes, the Hillspeed driver found himself in the thick of the action at the Leicestershire venue but took on a starring role in race two to claim his first piece of silverware behind the wheel of a car.

Showcasing encouraging speed across Thursday and Friday’s practice sessions under the flightpath of East Midlands airport, the 17-year-old endured a frustrating start to his weekend on Saturday in dry conditions.

Despite setting the 11th fastest time in what proved to be an ultra-competitive qualifying session, Clarke was later deemed to have failed to comply with yellow flag signals which subsequently saw him disqualified, affecting his grid position for races one and three.

Starting 17th for the opening encounter, the Torq Racewear athlete set about making amends following his qualifying woes and was soon on the move as he fought his way up the order. Making up a handful of spots early on, Clarke ran 14th for a majority of the race before pulling off a string of masterful overtakes on the last lap to cross the line in 11th.

However, a timing error meant the chequered flag was inadvertently delayed and shown incorrectly at the end of lap 13, with the regulation distance actually being 12 laps. Counting back one lap in accordance with Motorsport UK regulations, Clarke’s sensational hard work was undone as he was ultimately classified in 14th.

Greeted by rain for the first of Sunday’s two races, the Fewkes Sport Management racer lined up in fifth virtue of the reverse grid and he made the most of his lofty third row starting spot.

As the lights went out, Clarke’s wet weather prowess came to the fore and he was soon into the top three by the second tour, exploring the levels of grip and underlining his eye-catching car control.

Finding a way past Carter Williams as the race reached the halfway marker, Clarke ran comfortably in second place for a number of laps before being shuffled back to third on lap seven. From there, the former karting ace fended off the challenge of Guilherme Peixoto to cross the line for his first podium in the series.

Sadly Clarke’s second weekend in the single-seater category came to a close with a technical issue forcing him to make an unscheduled pit-stop early on, dropping him down the order and out of contention of a good result.

Leaving Donington Park, Clarke sits 12th in the overall Drivers’ Championship after the first seven races of the 2020 campaign.

“It’s been a bit of a rollercoaster weekend but to come away with my first British F3 podium is amazing; I’m really happy that I’ve been able to tick that box now.

“I didn’t get the best of starts but managed to remain in the mix around the first few corners and that set me up for the rest of the race. It was difficult to stay on the track and I outbraked myself a few times but once I got into a groove I felt really comfortable, especially as I’d never driven round here before in the wet.

“To come away with a first podium in just my second event is really encouraging moving forward. I’ve got to say a huge thank you to my team, family, loyal sponsors and partners – without them this wouldn’t have been possible.

“Aside from the podium it has been a difficult weekend where things didn’t fall our way. It’s all a learning process though and we will take what we’ve learnt here and see what improvements can be made heading into the next event.”

The BRDC British F3 Championship now heads to Brands Hatch on August 29/30, with four races scheduled to play out around the legendary Grand Prix layout of the Kent venue.