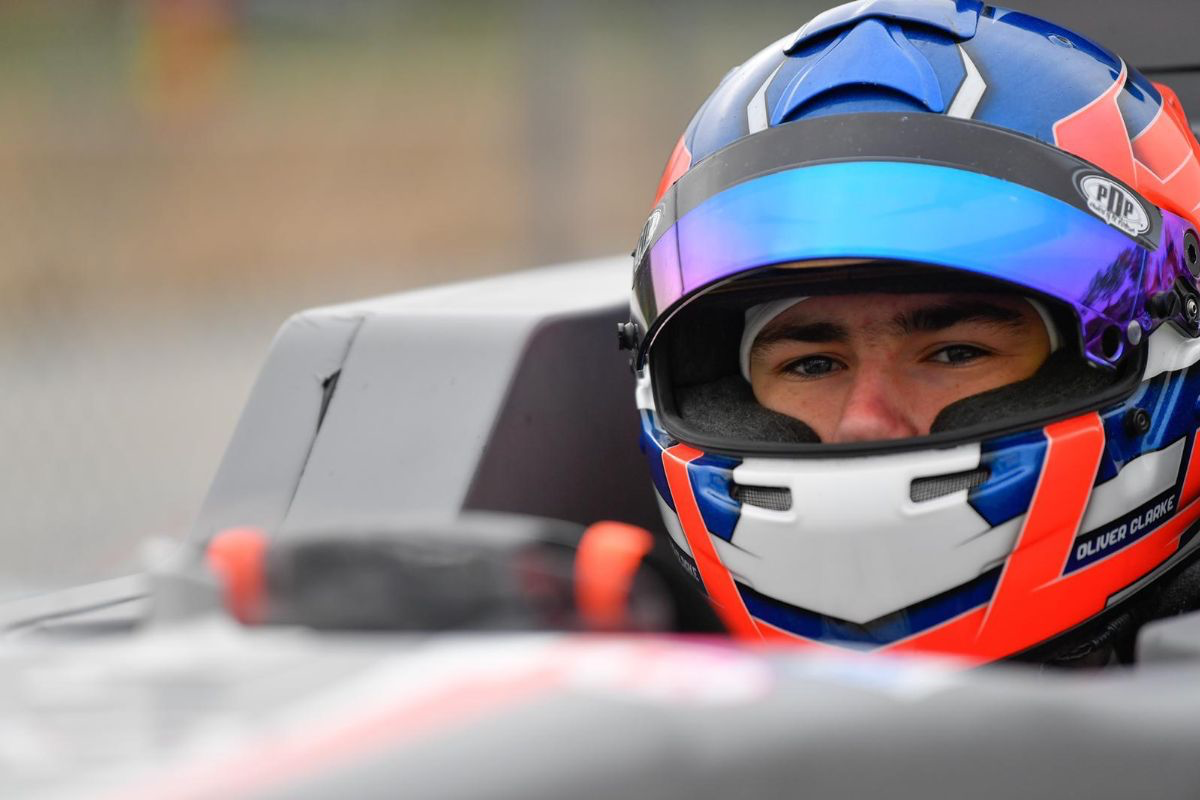 Returning for a second year in the ultra-competitive single-seater series with Velocity Racing Development, the 16-year-old scored a career-best finish of fifth place in the third and final encounter of the weekend – capping off a memorable comeback.

After refining the car during both practice sessions around the 2.54 mile circuit, qualifying looked set to be a frenetic session however Clarke and the rest of the grid would ultimately be unable to take to the track to duke it out for pole position.

Heavy rain, strong winds and lightening caused flash floods at the venue and qualifying was cancelled, with grid positions for the season-opener based on the fastest times from practice – meaning Clarke would line up ninth for round one.

Lining up inside the top ten, the Norfolk-based racer enjoyed a strong start to the seven-lap encounter however his aspirations of the podium were dashed soon after as an engine failure forced him to grind to a fiery halt.

With substantial damage to his rear-wheel-drive machine, Velocity Racing Development worked overnight to ready the #62 for race two the following day, and Clarke repaid his team’s hard work with a scintillating performance.

Starting from the pit lane, the former karting ace underlined his overtaking prowess as he scythed his through the order, securing one jaw-dropping overtake after another.

Dispatching a handful of drivers on the opening tour, Clarke soon became a force to be reckoned with as his striking VRD machine firstly edged into the top 20, and then into the top 15.

Hounding the back of Ryan MacDermid and Wyatt Brichacek in the closing laps, the British teenage sensation narrowly missed out on the top ten at the chequered flag, instead settling for 12th overall.

Virtue of the starting grid for race three being based on the fastest lap times from the previous race, Clarke lined up on the outside of the front row for the final encounter in second place.

Lacking rear tyre temperature, Clarke lost a handful of spots as the lights went out but was soon back on the tale of the leading pack. Try as he might, Clarke was unable to find his way past those ahead of him and crossed the line in fifth – his best finish to-date in the championship.

“Kicking off the weekend, we made lots of improvements throughout testing and we lined up for race one feeling confident. Sadly an engine fire put pay to our chances of making an impact towards the front of the field.

“The team were brilliant and a lot of credit must go to them as they worked through the night to ensure we could get on the grid for races two and three the next day. To go from the pit lane to 12th in that second race was fantastic and set us up for a strong final race.

“Wheel spin off the line and then being pushed wide early on scuppered our progress but we bounced back and brought the car home in fifth, which is my best finish to date in the championship.

“Looking ahead to the next round I’m confident that we will be firmly in the mix towards the front. We can take a lot of positives from the opening event and there is still a little bit of speed to find but we will get there. I’m really looking forward to seeing what we can do next time.”

Following the opening round of the season, Clarke leaves Road Atlanta sitting ninth in the Drivers’ Championship.

The F4 United States Championship powered by Honda resumes at the Pittsburgh International Race Complex on June 21/22/23 for the second event of the season.